When I first became aware of the minimalist movement at the beginning of 2012, one of the things that really intrigued me was people who actually took pictures of ALL of the stuff they owned. I believe one of them I came across was Adam Baker and his wife, from Man Vs. Debt. Their wardrobes in particular felt quite confining and boring to me, but the concept seemed so liberating.

The 100 Thing Challenge was started by David Bruno years ago, as a personal experiment to live with 100 or fewer personal things for a year. It gained momentum as other people decided to take the challenge, too. 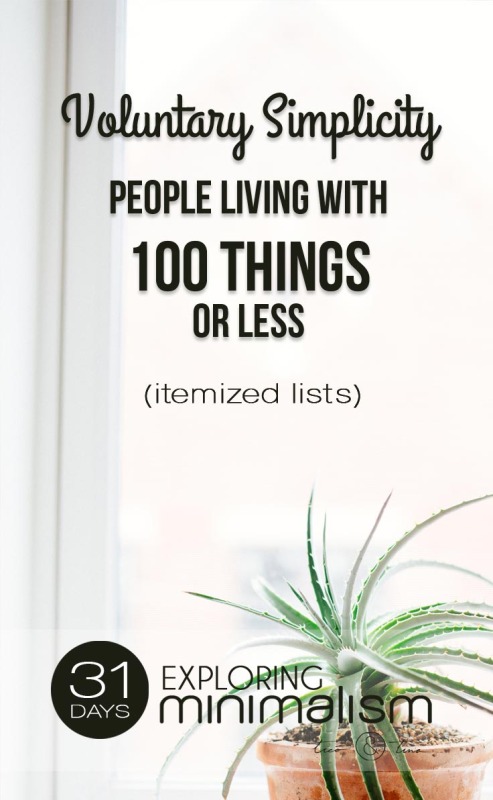 Another of the first people I came across in my reading was Colin Wright of Exile Lifestyle. I don’t know if he was aware of David’s challenge or not, but Colin’s list included 72 items.

Here are 5 other people I’ve run across listing 100 or fewer possessions.

Honorable mention to Joshua Fields Millburn who unapologetically owns closer to 300 than 100 things. I’m really not an extremist, so this is more my style.

Something important to note – taking a challenge like this to own 100 things is more about getting yourself to carefully consider what you own and why, and to discover what editing that could mean for you, more so than getting legalistic about it. Becoming a slave to numbers is no healthier than living with extreme excess – balance, my friends 🙂

So with that in mind, remember that each of these people made the challenge work best for them – and some of those with smaller numbers have arrived there after re-editing multiple times over the years.

No matter whether this seems entirely too extreme to you or not, I think we can probably still agree that it’s not healthy for one’s identity or worth to be tied to their possessions, and this type of challenge is very good for discovering things about yourself that you might never realize any other way.

Why we’re not counting our stuff:

Honestly, there is part of me that finds the whole method of counting only personal items in a family situation a bit of a cop-out – only because there are ever so many things that could be considered communal property. However, I did just say it’s not about the numbers, right?

If someone is bothering to count their things, they care enough about quality of life that they’re not attached to the 10 pens they counted as 1 item. And that’s really our goal.

I feel like we still have way too much stuff to want to tackle counting at this point, although we would probably have around 100 things just in our perfect minimalist kitchen, if that gives you any idea.

I’m sure we will someday do a count and probably a picture list, because for us it’s a great way to force ourselves to really evaluate and edit more purposefully – but we won’t be legalistic about it.

UPDATE: We started the process in 2015 with our wardrobes. Being gone half the year away from the majority of our “stuff” makes it harder to get “cataloged” as we’d like to finish doing, but this is where you can see what we have so far.

Becoming minimalist is very, very, very much a process… one that is very worth considering.

Here are some of our favorite “minimalist” posessions. (We own a different knife rack, but I want this one when we get a new house.)

Some of our favorite minimalist products: