There are 4 basic reasons I used to have trouble getting rid of stuff.

This was probably initially the hardest one to argue with because to me it really did feel like getting rid of a memory, but I addressed this here.

It was a gift.

If it’s a sentimental and completely useless thing, see above.

Generally speaking, I recommend making a reputation for yourself as one of those people who is hard to buy for. This is more of a preventative measure for the future, I’m sorry you can’t go back in time and give younger you the message to start earlier. There are a FEW people who are great at giving gifts. Everyone else is all about “it’s the thought that counts”. And it is… sort of.

It’s definitely tough to think about possibly offending someone by getting rid of something they gave you – unless you’re a mean jerk, which I am not. Some people say they wouldn’t notice, but I’m actually someone who does notice stuff like that. I thought some friends got rid of something we gave them, and actually wasn’t that offended because they get rid of things a lot and it’s not something I would give them again if I had a do-over, but then it surfaced again and I was surprised 🙂

I guess one of the easiest ways to get out of keeping gifts you don’t want taking up space in your house is to never have those people who gave you that thing over so they can’t notice you don’t have it anymore. Not that that seems mean or anything, considering they gave you a gift and all…

For most gifts, though, you’re the only one who is going to know if you got rid of it. And yes, you may feel a bit guilty and nervous when you’re around that person for a while, but eventually you’ll get over it.

If you do find yourself in an uncomfortable situation where Aunt Gertrude asks you about her gift to you, it doesn’t hurt to have given it to a needy family or donated it to help raise funds for something heart-warming. Just saying.

You also might never in 1 million trillion years ever need it.

And your kids won’t be thanking you for keeping all those “what if’s” someday when you’re dead and they have to go through all of it.

In his book, [easyazon_link asin=”B00IIDETGW” locale=”US” new_window=”default” nofollow=”default” tag=”tictin-20″ add_to_cart=”default” cloaking=”default” localization=”default” popups=”default”]Everything That Remains[/easyazon_link], Joshua Fields Millburn tells the formula he uses to decide if he should keep something he “might need someday” – if he can replace it within about 20 minutes for around $20, it’s probably not worth storing.

Your time and money might be different than his, but it’s helpful to set something like that for yourself.

Sure, yes, lots of things are still perfectly good. But I’m not sure when I signed a contract that said I am only allowed to get rid of things that are broken and falling apart and hideous. Did you?

No doubt this way of thinking is residual damage still lingering from the toll the Great Depression took on people of that generation and was passed down. In fact, I think the reason we need a concept like minimalism at all is due to the pendulum swinging back from that time of extreme lack over to “if we can have it, we should!” and “have all the things!”

When it comes down to it, it’s more about fear than about trying to be frugal or responsible.

You’re not doing anyone any favors by holding onto more stuff, perfectly good or not. There’s nothing noble about it. 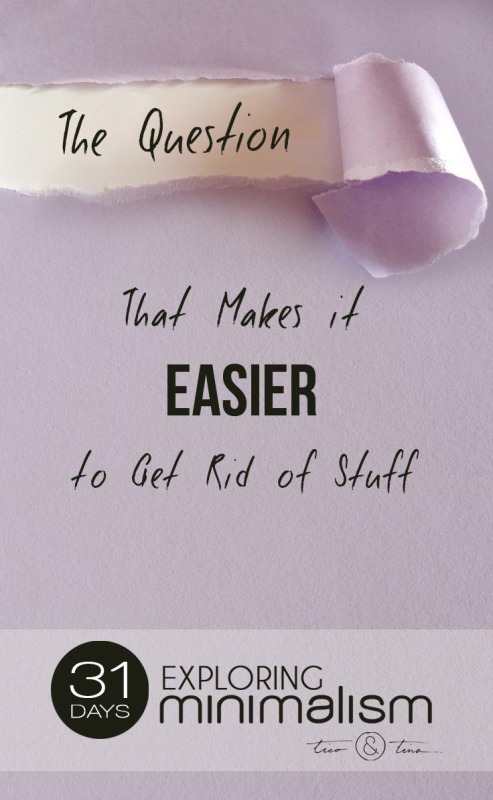 Here’s the question you need to ask yourself:

Would I choose to go out and buy this thing again right now today if I didn’t have it?

(I adopted and adapted this question from how Dave Ramsey helps people think about debt.)

If the answer is “no”, then you probably would really be better off without it.

If the answer is “no, but it’s the best I’ve got for now”, then keep in mind that you want to “upgrade” and keep an eye out for the right deal to come along so that you can. (That’s what I’ve been doing with my wardrobe for a while now – I’m working myself up little by little 🙂 )

But really, this question is mostly for things that you don’t use on a regular basis.

Now I know there are a couple objections that will likely come to mind, depending on what type of item you’re not sure about getting rid of – “I couldn’t afford to buy this again!”, “I got such a good deal on it!”, or “I spent so much money on it and I wouldn’t be able to get what it’s worth out of it!”

But consider this – storing something you don’t use or like is costing you, too, in more ways than just the space it takes up…