I came into marriage with every intention of being the most amazing wife to ever walk the earth.

Unfortunately, great sex doesn’t magically make the rest of your marriage awesome. In fact, everyday real life is a lot less about sex than Hollywood would have you to believe, much to my chagrin.

Real marriage is about coming together as one in every part of life in an incredible union that represents most fully the image of God and causes people around it to take notice. We’re not quite there yet…

I’m going to let you in on some of our issues.

Personally, I’ve never been a fan of feminist jargon. While I appreciate  our level playing field in the sense that women are no longer considered property or incapable of intelligent thought, society’s understanding of gender roles – as swinging pendulums tend to do – has swung disproportionately to the other side. This might have been ok except that it broke the clock altogether, causing men and women both to flounder their way through interactions in their fight to be the one to tell the time.

The evidence of this shows up in so very many ways, one of which I’m going to be talking about this month as part of Jac’s Godly Wife series. February’s topic is Honoring.

One of the first things I had to learn about honoring my husband – not trying to be so self-sufficient. 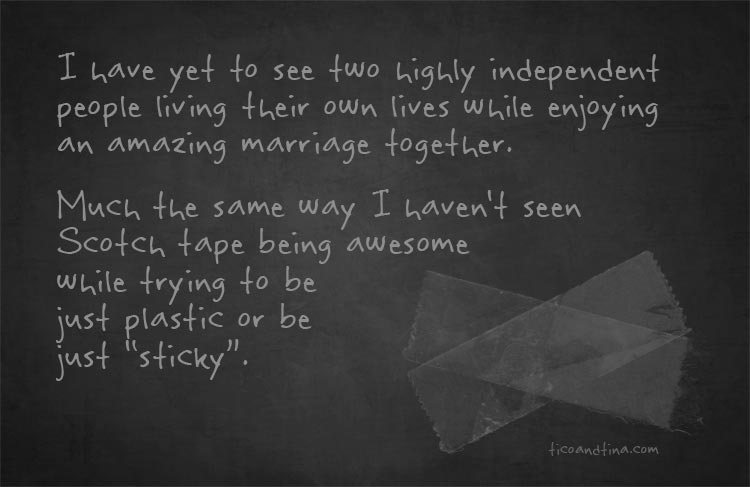 While I was no feminist, I was nothing if not an extremely intelligent, strong, and highly independent woman. *smirk*

Of course I didn’t think of being independent as a bad thing. Being a needy, emotional woman was certainly something to be avoided.

Strangely, I have yet to see two highly independent people living their own lives while enjoying an amazing marriage together. Much the same way I haven’t seen Scotch tape being awesome while trying to be just plastic or be just “sticky”.

I realized shortly that I wasn’t leaving any room for David in our “Scotch tape”, when one day after crying on his shoulder and apologizing for being such a basket case, he confessed that he kind of liked it when I cried because then he felt like I actually needed him. Oh goodness, did I. For reasons that will have to wait their turn to tell, I gave him many, many opportunities to “feel needed” in those first two years.

Granted, our marriage has evolved quite a bit as we have matured and gone through various stages.

I’ve discovered that being an internal processor means I have to try to be intentional in letting David into my thoughts a little more before the full on basket case occurs. Apparently the first he realized I was thinking or caring about something was when the crying happened, since he wasn’t inside my head where the processing took place 😀

I’ve also had to learn to recognize and understand verbal processing. Boy has that been tough! Did you know that sometimes when people say stuff, they are just thinking out loud? Oh my word, I just did NOT get this for the looongest time. It’s humiliating to admit that it took a good 7.5 years to finally click in my brain. Don’t get me wrong, I’ve always understood “thinking out loud” as a concept.

What I didn’t realize is that someone doesn’t have to announce “this is me thinking out loud” in order for it to be true.

Let’s just say many hours of disagreements and going around in circles could have been saved in the beginning of our marriage had we understood our difference in processing!

Friend, if you are not an internal processor, it’s pretty simple – I have all the same silly, ridiculous, irrational thoughts and fears as the average human, I just don’t verbalize things that I haven’t processed to be true. From where I was sitting, I was having a hard time not seeing David as a bit of an irrational dolt in many of our conversations as he spouted off. I will admit to having a bit of a pride problem as well… thankfully I think I’ve stepped down from that ugly pedestal.

Jac asked us to share our working definition of honoring our husbands, but truthfully I am taking this month to process what it all has come to mean to me, so I’m going to be building my definition as we go. For starters…

A Working Definition of Honoring My Husband – Part 1:

Join us in focusing on honoring our husbands this month and link up your experience and thoughts about it in the last week.

How about you? How do you process things???