Christmas is not a Christian holiday in the same way that Jesus’ disciples weren’t a “holy yoga” class.

(And in the same way that you can compare apples and oranges, but you get my point.)

I don’t know whether or not the last time you read the whole Bible you noticed that there is nothing in there about celebrating Jesus’ birth after, you know, his actual birth.

God set up a bunch of other feasts and celebrations, but the birth of his son is notably not among them. Not to mention that no one knows the actual birthday of Christ, though many scholars agree from the clues provided that it was most likely late summer or early fall. 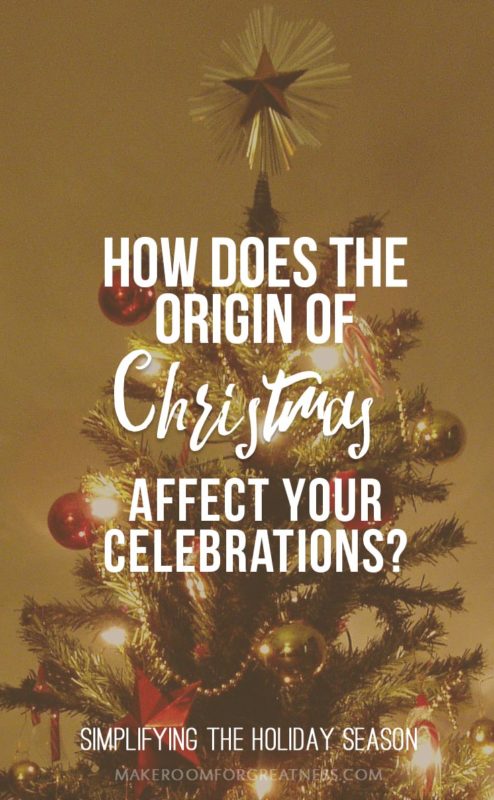 Christians get all up in arms about defending the “reason for the season”, but the reality is that Christmas as we know it seems to have been adopted as a way to allow Romans to keep their traditional pagan festivities (and pretty raunchy ones at that) of that time of year, while easing into Christianity as a state religion.

It’s easy to jump on the bandwagon of Christianizing everything. After all, it’s been so long since we’ve adopted these traditions that they just don’t mean what they used to mean. And anyway, Jesus makes all things new, right?

There may be some relevance to this – meanings of words do somewhat evolve over time, but the patterns established by a God who is the same “yesterday, today, and forever” suggest otherwise.

The Israelites were warned that if they didn’t completely defeat and expel the other nations from the promised land that the people would be stumbling blocks/thorns in their sides and their customs and religions would cause the Israelites to sin against God.

Even if God wasn’t part of the equation, at what point, does it become ok to forget where we’ve come from? How far removed do we have to be – who gets to decide that?

If some future leader adopts a swastika as part of his logo, will it matter what it once stood for? (It was, in fact, originally a lucky symbol for good health and good fortune before it became a more perverted symbol of evil to most.)

Are meanings only as relevant as our understanding of them?

If you do your research, you’ll find that the origins of Santa/St. Nicholas, candles in the window, holly wreathes, mistletoe, the Christmas tree, and even the red balls which commonly decorate the tree, all have questionable origins at best.

Along with that, it’s hard to deny that holidays now serve businesses and organizations more than anyone else, as they capitalize on the opportunity to make bank and further their causes in various other ways. It’s enough to make some people want to take a stand against consumerism by boycotting the holidays altogether.

So where does that leave us?

We all have to decide for ourselves how important origins are, and what that means to us. Whatever way Christmas traditions started, the fact remains that it’s not a holiday instituted in the Bible, which for us means we’re not going to allow ourselves to feel pressured by trying to make it perfect or religiously guilt-tripped into trying to defend it.

The truth is, regardless of other factors, fellowshipping with family and friends, encouraging one another and making memories is a good thing. Taking time to rest and reflect over the year and plan for the new one is a good thing.

We don’t need a sanctioned holiday to do these things.

We haven’t created our own family policy on all of this yet, but there’s nothing saying that we can’t develop our own good habits and new family customs. We just want to make our choices based on truth rather than blindly adopting traditions of men.

When you put thought into why you do what you do, life becomes much more rich and refreshing!