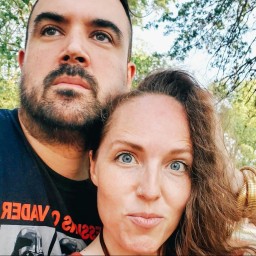 “Passive income is an income received on a regular basis, with little effort required to maintain it.” (wikipedia)

That sounds like something anyone would be happy to get friendly with.

The most familiar and widespread forms of passive income are probably interest on a savings account (pretty abysmal these days), or money earned from a rental property. 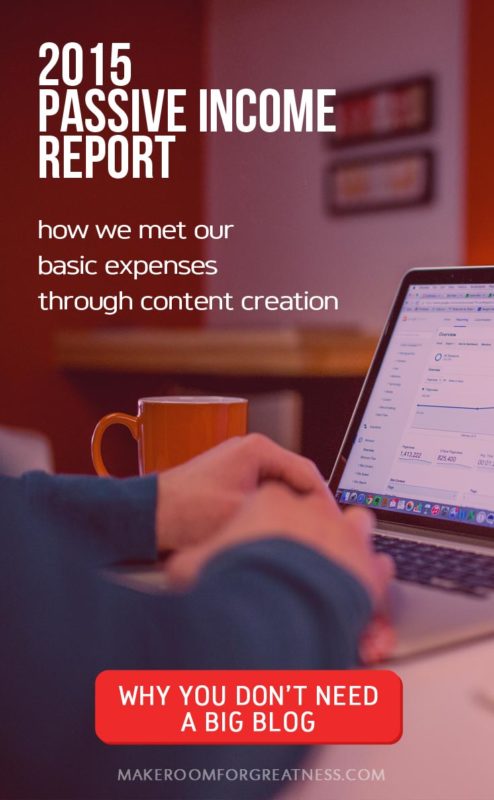 Some streams of passive income may take quite a while to set up, but once they’re flowing they shouldn’t require extensive continued attention.

We made a kind of crazy goal last year to develop our “passive income” (in our case, “online income”) to the point where it could cover our basic monthly expenses.

I say “crazy” goal, because at the beginning of the year, our semi-reliable online income was less than $200/month.

Some of what’s included in the budget isn’t mandatory spending, like setting aside a bit in savings, for example. So earning an online income of anywhere from $1K-$1.5K/month would feel like a win to us at this stage.

To be honest, though, we didn’t end up working on the goal like we had wanted to. We had a bit of a paradigm shift in some personal stuff and just had a lot going on in general.

It’s not an excuse, just a choice in shift of focus.

Ultimately, the only real reason you don’t do something is because you don’t prioritize it.

Sometimes there are very relevant reasons for changing your priorities, and even though I felt right about what we chose to do last year, it was still easy to feel in the back of our minds like we were failing – I know David felt this much more strongly.

In spite of how much we felt like we were failing last year, as 2015 came to a close, we found our goal not only met, but close to doubled in the last month.

It’s relevant to note that we look to God as the provider of any and all tools we need as we “seek his kingdom first”, and we view money as simply one of those tools. So to be honest, I wasn’t too surprised to meet a goal that we felt lead to make, but we are amazed and extremely grateful for the above and beyond.

Here were our quarterly totals:

Don’t get me wrong, we’re definitely always putting in work, but there are aspects of things that we don’t have control over, and the crazy increase we saw in the last month of the year that catapulted us over our goal was due to one of those things.

Allow us to expound…

Our goal here is to give a peek into the realities of starting small with growing various avenues of online income and the work that goes into that.

Pat Flynn has positioned himself online as sort of the passive income guru, and we love pretty much everything he does, one of which includes monthly income reports.

We meant to start doing regular reports from the beginning of 2015 when we made the goal, but with our shift in priorities it never happened, so now we’re starting with a year-in-review.

We first blogged in 2006 as a young married couple, using it kind of as a journal of sorts, but then there were a couple years in there with little to no activity.

Towards the end of 2011 I decided to pick it back up again as a hobby because I missed writing, and to my surprise I discovered there was actually a blogging community, so I enjoyed getting to know a few people.

I experimented with various types of posts over time and joined a month-long daily writing challenge to stretch myself. I can’t remember what theme I’d planned to write about for 2014‘s challenge, but at the last minute I felt a nudge to switch it to minimalism.

There was no way for me to have known, because I wasn’t researching or planning anything – just sharing something that had had a big impact on our lives, but it turned out that the timing was good for that topic and our traffic started gaining momentum.

When we hit a month with close to 300K pageviews we were encouraged to think that maybe we actually had a chance to make some kind of side income with this site.

Until that point we hadn’t really considered it as a viable place to focus our energy, but it was the push that inspired us to take it a little more seriously in 2015.

All that to say, it definitely took time and experience to build up to this point, BUT it was mostly a lot of randomness that could have been avoided with a clear plan from day 1.

Clearly, we have a lot of work to do in audience retention – we currently do next to nothing.

Some of the most popular content on our site continues to be the minimalism series, which points to the importance of evergreen content.

The reality is, you can research keywords, set up your SEO, and be consistent in putting out content and promoting it, but at the end of the day, sometimes the most random things take off.

Switching channels, that’s what happened with this very random daily life vlog of ours. It was already 8 months old, but from what I can tell, around April of last year it started being suggested by YouTube or perhaps was embedded in some other site and then started showing up in suggested videos.

Over the year it had 1.6M+ plus views and made over $1K in ads – 1 video by FAR the most responsible for the majority of our overall $1,334.23 YouTube income for the year.

We only have a little over 3K subscribers on our channel, so you just never know.

What we did well with our content creation in 2015

That may sound like an exaggeration, but sadly, it’s really not.

We know most of the “right” answers of all the things we should/could be doing to amp up, optimize, and really grow our “brand” and content creation as a business, but there are other things we’re more thirsty for right now, so it’s a slow process.

In 2016 we hope to do better and experiment more with various passive income options and let you know what seems to work best for us and what doesn’t seem to be worth the time.

What that will end up looking like remains to be seen, but if you want to make sure to get updates you can subscribe below or follow along on your social media of choice.

Also feel free to ask any questions in the comments below!