For too much of my adult life I have resigned myself to “making do”.

When we got married we just kind of slapped our living space together with whatever hodge podge stuff we brought with us from our previously separate lives and that which we got from our wedding.

When we purchased our first home six years later we were in a major transition with David’s day job and didn’t want to spend any extra money, so the haphazard decorating continued.

My wardrobe became more and more bloated with items I sort of maybe liked because I’d found them 80% off on clearance, or for 50¢ from a garage sale or thrift store.

I found myself feeling completely uninspired and rather hopeless that things would ever change.

Having been raised to be a “good steward” of my money and possessions, I had somehow developed the subconscious idea that it meant not having nice things.

Well, little wonder – trying to have the “nice” versions of all the things that we had would never have been able to be considered being good stewards in light of so many people around the world who have next to nothing!

As we’ve grown to understand minimalism over the last couple of years, and embrace it for ourselves, however, my way of thinking has shifted.

I no longer buy a bunch of things just because they’re cheap and “will do”.

Where in the past I would have felt guilty buying something really nice, knowing how much overflow we had at home, I am now at peace that we are purging excess and our life is beginning to line up with what we really value.

Instead of having 10 shirts that I’m merely OK with, I would now rather have two shirts that I LOVE. My price point for a new shirt was in the $3-$5 range, so if I take what I would have spent on those 10 shirts, that now gives me $30-$50 to spend on just two shirts.

Now don’t get me wrong, I still love a good deal and the thrill of the hunt, and you had better believe I will still look for the right item for less. I mean, when you can get a jacket for 20¢ it makes you re-evaluate how much you really want the $50 one.

But that’s the point – you’re evaluating, not mindlessly consuming to the point of gluttony and feeling sick after.

Minimalist living frees you to have what you really want because you’re not bogged down by what you don’t need. 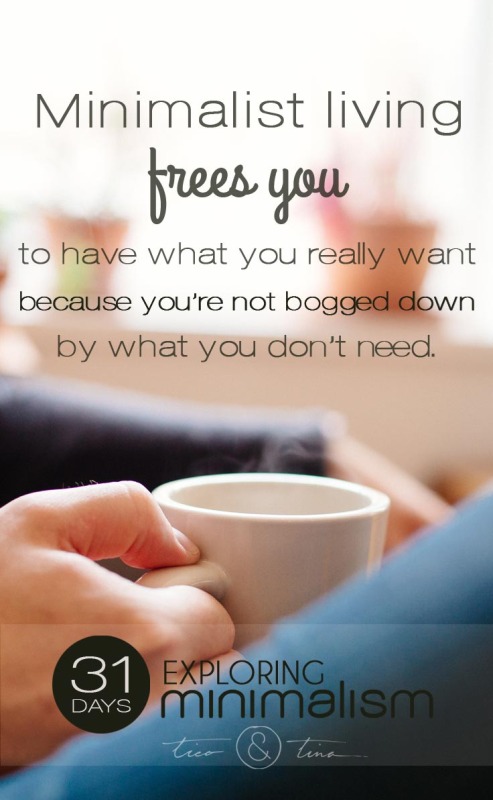 Are you tired of settling?