It’s no secret that most conventional laundry detergents are quite toxic, but are natural laundry soaps that much better?

“When we decided to have a child, we didn’t wait for our baby to come into our life and change it. We took steps to change our way of living way before I even got pregnant.”

That’s my younger sister talking. She’s six months pregnant and she’s already an expert on clean, natural, ecological living. I’m not sure what prompted her to change the lifestyle (she’s had several attempts across the years), but one day she decided to throw away any chemical detergents in their household and switch to natural laundry soap and homemade dishwashing liquids.

I’m well acquainted with my sister’s (and my brother-in-law’s) quirkiness and I usually pay them no heed, but this time I have to say their decision made me curious.

Why would people choose some unknown brand of natural laundry soap over chemical ones? The answer might lie right there, in the question, but contrary to popular belief,  “natural” doesn’t always mean “better” or “safer”. 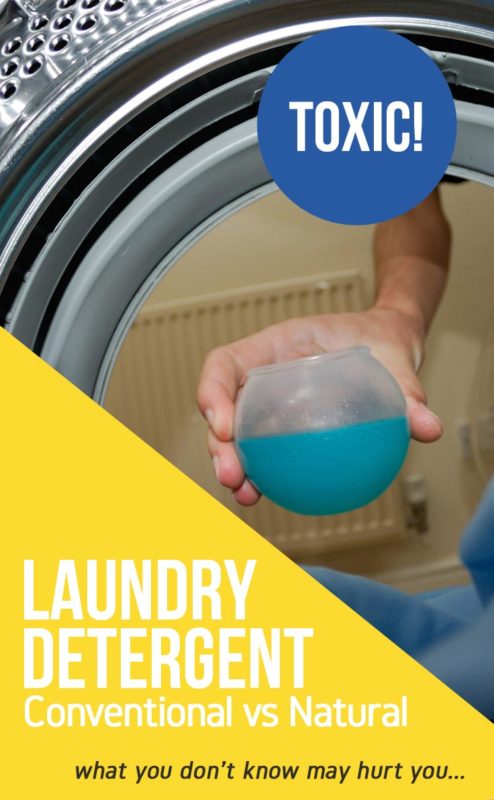 So what’s in your average detergent?

I decided to check my wife’s laundry detergent, and here’s the first thing that caught my eye: “Danger. Can cause severe eye injury, skin irritation, harmful to aquatic organisms”.

But that doesn’t necessarily sound so dangerous, does it?

Well, that’s kind of the point. Most companies won’t disclose on the label the exact chemicals found in their products.

They say it’s a precautionary measure against recipe stealing, but some of these undisclosed substances are actually extremely toxic to humans, wildlife, and the environment.

Here are just a few examples of toxicity in conventional detergents.

Linear Alkylbenzene Sulfonate (LAS): According to one of the leading companies specializing in detergent-making, this is the most widely used anionic surfactant in the world. It “removes stains from your garment“. It’s also corrosive to eyes and a skin irritant, according to the U.S. National Library of Medicine, and some of its components could be carcinogenic.

Sodium Hypochlorite: This is the fancy name of regular household bleach. It can produce caustic irritation and burns and may react with other cleaning products, generating volatile organic compounds (VOCs), which may be toxic and carcinogenic.

Phosphates: Used to counter the effects of the hard water (that is, rich in minerals), these chemicals are a killer when it comes to the environment. They’re deadly to fish and have been known to support the development of algae bloom, which in turn can affect the eco-system.

Optical Brighteners: These are synthetic chemicals used to give the illusion of whiteness, by absorbing UV light and converting it. They can cause allergic reactions.

Something to consider is that accidents involving detergents aren’t just a possibility, they do happen, and most of those affected are children. You can read about some of these cases here and here.

To learn more about chemical detergents, check out this list provided by the National Library of Medicine. You’ll find ingredients, handling, and also health effects.

What about natural soaps and detergents?

The goal with all natural laundry detergent is to provide the same results while removing as many of the issues associated with mainstream chemical detergents as possible.

It’s made with eco-friendly ingredients, and the best part is that, while you can buy them online or in the store, you can also simply make them yourself. And for a lower price, too.

The downside is, many of today’s moms don’t have the time to make their own laundry soap, don’t like working with chemicals, or simply prefer the convenience of buying mainstream detergents.

After all, when we were babies our mothers used the same products, some even more dangerous than today, and we turned out just fine, right?

Using conventional detergents may seem fine for a while, especially when it’s just you. But once you start having kids, it becomes another matter.

Not that toxic products are good for anyone, but for kids, whose immune systems haven’t had time to mature, it can be a lot worse.

Just because something is more natural, though, doesn’t necessarily automatically mean “safe”.

Some natural laundry detergent recipes use borax – a substance considered a risk to fertility and to the unborn child, as the main ingredient.

What if you can have the best of both worlds?

MyGreenFills is committed to simplifying your laundry life while protecting the environment.

They keep all the yucky stuff out of their products so you don’t have to worry about using it for your family.

This will also be the last jug you’ll ever need because their innovative product is sent in a little refill packet whenever you want. (No more running out of detergent because you forgot to pick it up at the store, or for that matter, lugging those heavy jugs home!)

AND they’re offering free shipping on their new discovery kit so you can try it out for yourself!

At the end of the day, you’ve got to choose the best products for your family, just don’t assume it’s safe because you can buy it in a store.