We all know someone (or someones…) who just have a ton of stuff you know they never use, never will use, and yet can’t seem to get rid of it.

Pssst! We used to be those people…

Our home was a complete mess more often than it was not, but we never really considered getting rid of things… clearly we just needed a bigger space!

Then we moved from our 750sq ft apartment of six years and realized, after the 3rd pickup load of things that weren’t furniture, that we had a problem. 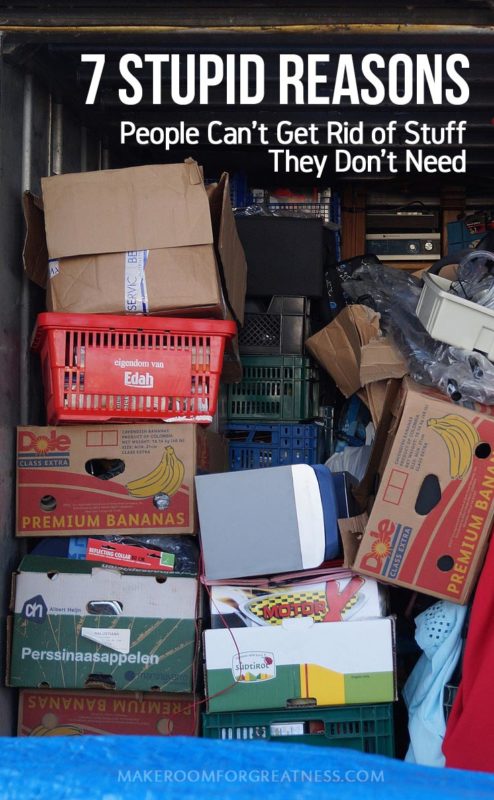 1. It feels good to have just the “right” tool for the job.

Even if you don’t actually DO the “job” more than maybe once a year.

2. The plan to fix something or use it for parts is great in theory, considering YouTube can probably show you how to fix almost anything these days. (Even how to do stuff like a man 😉 )

The reality, however, is that it just sits in your garage or basement or a junk drawer or closet for years collecting dust and taking up space you could be using for something much more inspiring.

Who are those weirdos?!

Ideally, you change and grow for the better, and you really don’t have to keep all the old stuff that just isn’t you anymore, or isn’t serving your real goals.

4. When you spent a lot of money on something, it’s hard not to feel guilty about getting rid of it, because you don’t want to feel like you just wasted the money.

The thing is, wasting space to store something doesn’t redeem the money that’s already been spent.

Anyway, there’s a good chance you could recoup some of your money selling the item online or through local consignment or garage sale if that’s really the only thing keeping it around.

5.  Decision fatigue is something we’re probably all experiencing, whether we know what it’s called or not.

These days there are just too many choices.

We have something we’re not sure what to do with, and we feel like we need to know all the options and weigh all the pros and cons before we can make a good decision about it.

It feels so much easier to just push the decision to somewhere in the future, which in this case means simply choosing to keep a lot of things we don’t need.

Being afraid of making the wrong decision may also be an indication that you haven’t taken enough time to really hone your goals.

6. When something was a gift, it’s hard not to feel bad getting rid of it.

If you’re an adult, that is.

That’s why, unless you’re really sure I want something, I’d always prefer money, just FYI. (Or doing something fun together.) And why I hesitate a lot now about buying stuff for other people.

No one wants to make someone’s inner child cry when you give them a gift.

6b. Sentimental items are another story for their own post.

All that honestly boils down to is just fear masquerading as frugality.

If you dig deep, you find that holding onto things “just in case” stems from a poverty mentality or mindset of lack.

What if… I’m not taken care of in XYZ situation.

We aren’t meant to strive and struggle to eke out an existence, but the peace is in the paradox.

Seek first the Kingdom of God and his righteousness, and all these things will be provided to you. Matthew 6:33

How about you? Is there anything in your home that could use a re-evaluation?

If your stuff isn’t truly serving you, ultimately you’re serving it.

What stupid reasons did we miss?

Also, we’re trying something a bit different with GIFs here, obviously. It feels a little harder to read to us, but this style of post seems to be popular with some segments. What’s your vote?