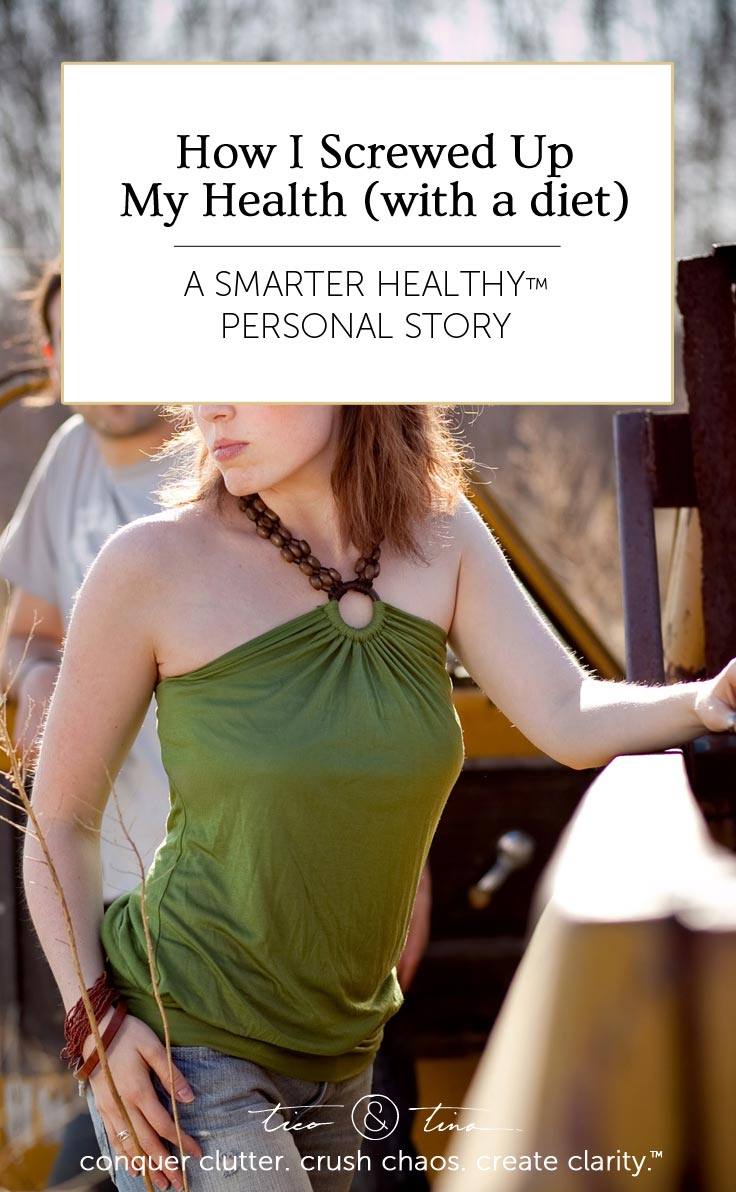 This is a personal story of how I became a hypochondriac, and a cautionary tale of how not understanding realistic weight loss goals put me in a very crappy situation.

But first, some weight background…

I once heard that you can tell how a woman will age by observing her mother.

As with anything in life, it can’t be true across the board, but I find it to be pretty accurate in many cases among my peers as we get older.

That said, I’m really thankful to have been raised by a health-conscious mama who went against the grain – sometimes to the extreme, with her powdered milk, exclusively whole wheat home made recipes, infrequent desserts, and vegetarian leanings.

Our menus weren’t necessarily popular among my friends, and sometimes not with my brothers, either (they wanted more manly meat 😉 ) – my mom definitely had a more utilitarian approach to cooking, but I appreciate how that helped to inform my simple mindset with food.

Don’t get me wrong, my brothers and I do recognize and love great food, but we’re also all able to truly enjoy a very modest fare, and I think we all have pretty good weight loss goals.

Everyone has always thought my mom was one of those naturally thin people, but the truth is, she got chubby in college. I also remember her sometimes doing one of [easyazon_link keywords=”stormie omartian workout” locale=”US” tag=”tictin-20″]these workouts[/easyazon_link] (LOL) when I was a kid. I think she practiced healthy weight loss.

As it turns out, I also got chubby in college, but I was able to get a hold on my weight fairly quickly with a little exercise and reformed eating habits upon returning home that summer.

The point is, I was health-conscious, but never obsessive or fearful about it…

The first few years of marriage were a bit of an adjustment, as David and I butted heads a bit in our approach to food. To be honest, food has been a much bigger struggle to me since getting married…

Whereas I previously ate mainly out of necessity based on hunger, it became much more of an event tied to entertainment. I won’t say I don’t enjoy it, but it’s definitely also been a huge frustration to me.

Until my life was turned upside down…

I shared my story in this video below.

We celebrated our first year of marriage on a two-week “business” trip in China. I don’t remember the details of the trip – my dad probably could have just gone himself or maybe even had the stuff we picked up shipped over, but we were really glad he let us go instead. I had lived there for a period of time growing up, and I was anxious for David to experience the place that had never left my heart.

One morning while we were there, my mom called out of the blue to tell me that my dad had a gun out talking about ending it, and our pastor had helped her admit him to the psych ward.

I was in shock.

There had been a number of unusual situations that popped up over the past couple years, but I had just chalked it up to my dad’s personality of extreme tendencies. This definitely indicated something bigger was going on.

Long story short (and I mean really short because it’s not what this post is supposed to be about), the dad I thought I’d known had been living a double life for years, and the mental dissonance took him over the edge.

Sooo many secrets came out and he ended up leaving my mom and moving overseas.

I wouldn’t have thought it would be such a big deal for parents to split up when you’re already grown, but we were all devastated. The extreme business and financial situation he left my mom in was beyond stressful, and we ended up changing our personal plans to be there to try to support her.

Somehow life went on, as it so heartlessly has a way of doing even when you haven’t yet learned how to cope.

One day I was sitting at work when I heard a voice in my mind tell me to feel my neck. It didn’t occur to me how odd that was, so I did.

What felt like icy bolts of electricity immediately shot through my skull as I discovered a lump under my jaw. My heart sank and fear punched me in the gut.

My doctor said to keep an eye on it for a month, and if it didn’t go away she’d do a biopsy.

That might not have been a big deal to some, but as a 23-year-old who was already in such an emotional and vulnerable place, melancholy consumed me.

All I could think was that God was going to use me in a horrible tragedy to bring my dad back to his senses.

Even though he specifically told me “Jesus already died, why do you think I need you to?“, I had so much messed up suffering and martyr-y theology that I couldn’t get the notion out of my head and my days were filled with fear.

As the time was almost up for me to get a biopsy I became more and more desperate.

One day, driving home from work I was BEGGING God to please take the lump away, and my eyes were drawn to a small black cloud. It stood out in stark contrast to the fluffy white clouds dotting the rest of the sky. As I watched, it rather quickly disappeared. It was so odd that I thought maybe there was a connection with my lump, so I began to feel it with my finger and was astonished as it completely disappeared within 60 seconds. I was SO thankful!!! But I couldn’t help feeling like God had taken it away begrudgingly.

The lingering feeling that I had let God down by not “submitting” to be “martyred” to save my dad turned into many years of hypochondria as I was always waiting for God to take me out for some other reason, since my dad did end up returning on his own.

I felt foolish and weak as David patiently went with me to the doctor for this and that issue that my mind had blown out of proportion. But you never know, right? Better safe than sorry when you’re not sure if God or the devil is your bigger enemy…

It was with this history in mind that I told myself to just be strong when a big lump started bumping into my rib. Sure, it had never been there before, and sure, it was very uncomfortable and I constantly had to push it back in, but it was probably nothing.

Truth be told, if it had been free and we hadn’t lived 45 minutes away, I probably would have high-tailed it to the doctor the same day, but as it was, I was tired of wasting money on looking like an idiot.

Thankfully, Maeve had a checkup or something a month or so later, and as her appointment drew to an end I thought I may as well have our doctor put my mind at ease yet again since we were already there.

I figured doctors should usually have pretty good poker faces, but I’ll never forget the scared look my doctor gave me when she felt what was going on in my abdomen.

It was already evening, so she scheduled me for an ultrasound the next morning. I’m sure you can imagine how great of a night I had.

When the ultrasound couldn’t figure out what was going on, I ended up back at my doctor’s office, still scared out of my mind. She took me in without an appointment and said she was sending me for a CAT-scan, but I had to give her a pee sample first to make sure I wasn’t pregnant for it. I knew I wasn’t because I’d just had my period a couple weeks prior, but I obliged.

Completely bewildered, I pocketed the test and went back out to where David was waiting in the car with Maeve.

We made it to the next waiting room, nervous and beyond antsy – so many feelings erupting at once.

The lump turned out to be a floating kidney. “A condition where the kidney is released from its moorings of fat, peritoneum, and blood-vessels, and occupies an abnormal position.“

Apparently the strict diet we’d gone on a couple months before to quickly lose the last 10 pounds (in my case) of baby weight from Maeve (who was almost 2 at that time), had caused me to lose the wrong kind of weight – what was previously keeping my kidney in place.

Who knew that was a thing?!

“…since emaciation and resorption of perirenal fat is a cause of wandering kidney, the restoration of these will assist in a cure… rest in bed and a diet that is fat-producing [are advised]. While this may be true theoretically, it is not likely to effect a cure very often. After replacing the kidney, the patient should lie in a recumbent position for a few weeks, and before leaving the bed, a firm binder, with pad, should be applied. The bowels should be kept in a soluble condition to avoid severe straining at stool, and the patient should be cautioned against any severe physical exertion. A snug abdominal support may assist in the cure by holding up the intestines, thus acting as a support. Should these measures fail, nephrorrhaphy, or stitching the kidney in place till adhesions fix it permanently, must be a final resort.“

I was certainly not interested in having surgery, but the chances of my kidney putting itself back in place seemed rather slim.

Let’s rewind to that part where I was pregnant…

Driving away from the hospital that day, David noted that it was just like God “to not only not take someone away from our family, but also add to it”. (I wish I could say I believed that in my heart that day and it was the end of my hypochondria, but there were many more years to that story.)

As our baby slowly grew, filling my belly, it eventually forced my kidney to stay in place. I was pretty nervous that after having our son Maverick, it would dislodge again, so I didn’t really try to lose the extra weight.

To be honest, I was nervous to diet at all for many years.

There are many little tricks and fads floating around for losing weight fast, and although it’s tempting to try them all, my personal experience would say, it’s just not worth it. 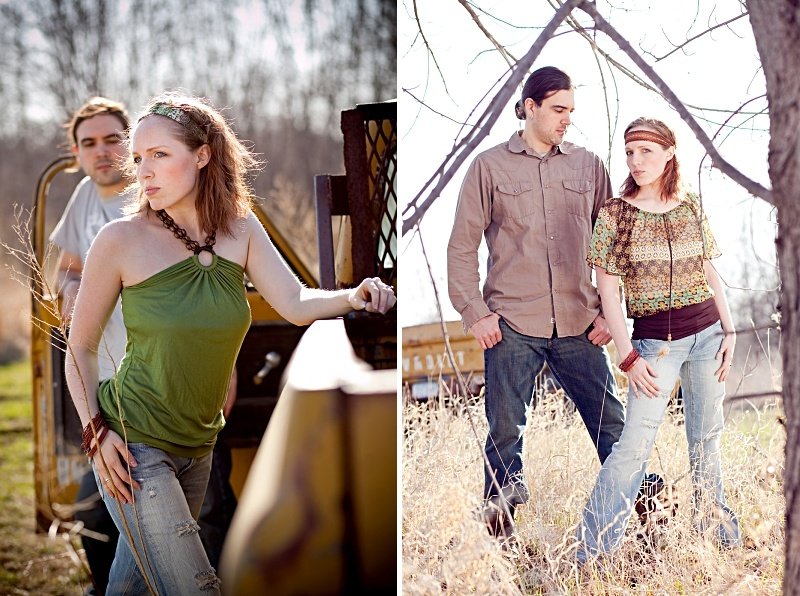 The damage I did to my body was from a diet with almost no fat and very little carbs, and I was losing approximately 2.5 pounds per week to get back to my “wedding weight” of 120. I felt great and was very happy with the results (at first, obviously), but I’ve since learned about the importance of healthy fats, and would never choose such an unbalanced menu again. Following realistic weight loss goals is important for not only physical health, but mental health as well.

Have you had any negative experiences with weight loss, or can you relate to hypochondria? 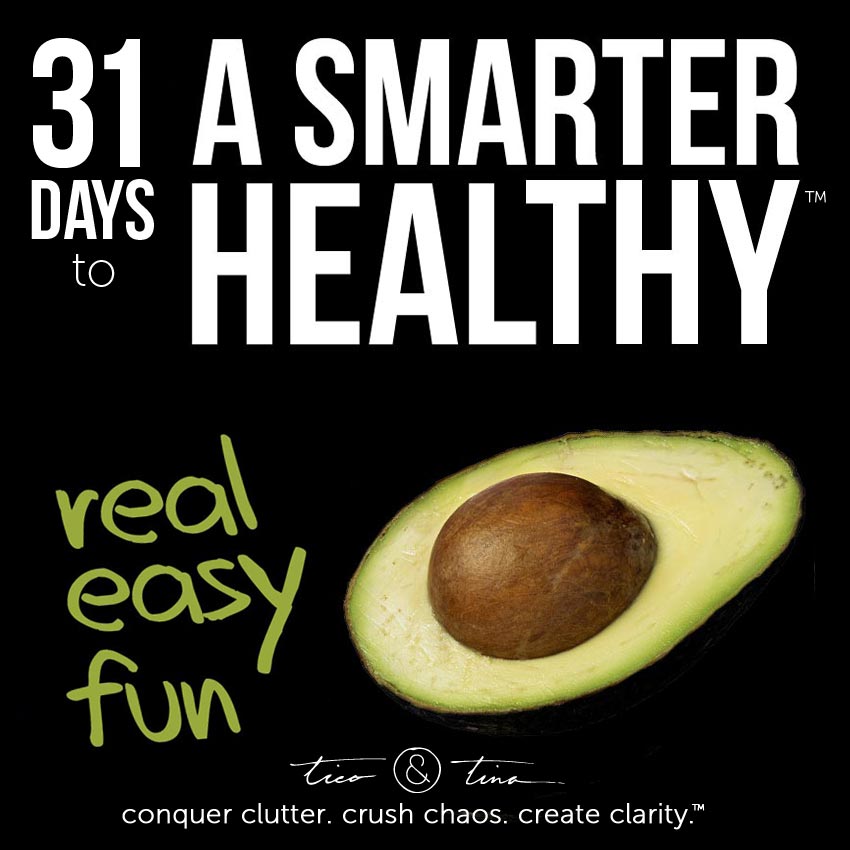 Call us crazy, but we think...