Minimalist wardrobes tend to have a lot of blacks and neutral colors.

Mine was no exception because I love black and I wanted everything to just be simple.

It was great – figuring out what to wear was a breeze.

I’ve always been interested in understanding what and how things look best on people, and experimented a lot growing up. In my minimalist journey I’ve made very logical decisions about what I felt made sense and what I thought worked fine from experience.

There have been many times lately editing videos and that I was unhappy and a little surprised with how blah I looked.

It’s easy when you notice something like that about yourself to figure you were just having an off day, should have bothered more with your hair/makeup, etc.

I’d noticed that since pairing down my wardrobe, my style was becoming more defined, and things I used to like wearing didn’t feel right anymore. But it takes time to grow into things and I was fine with that.

I recently embarked on a bit of an experiment with a system called Dressing Your Truth and discovered that I’m a T4 (Type 4), and should actually be wearing BOLD colors. 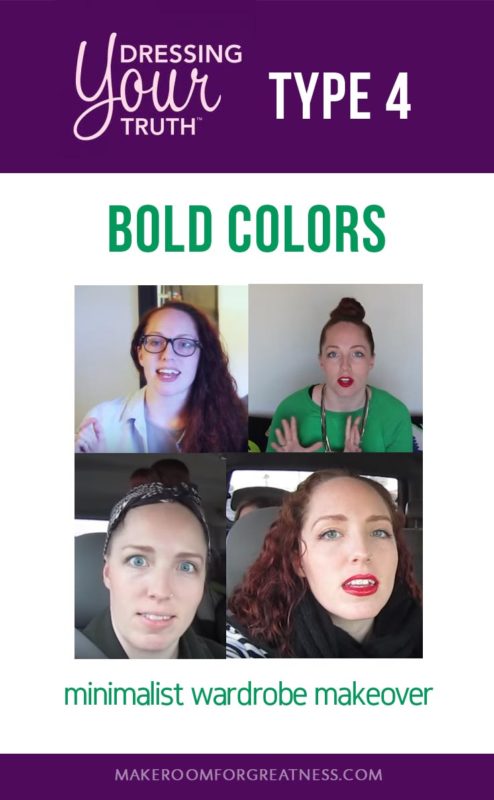 People may be familiar with the seasons color profiling from back in the day – Spring, Summer, Fall, Winter, which do sort of kind of correlate, but not really. According to that I sort of saw myself as more of a Fall, probably.

But I decided to take the plunge and get rid of the stuff in my closet that wasn’t T4. I figured I’d just stick with mostly black since I like black anyway.

I got “brave” and ventured into a dressing room with some bold colors, and was pleasantly surprised.

I felt much more alive.

I’m still sorting this out because it’s easy to confuse T4 and T1 colors, which I think I did with at least one of the items I got on that shopping trip, and it’s definitely going to take some adjusting in figuring out how my wardrobe works now, but overall I’m excited to keep experimenting and refining (or “perfecting“, which is a major T4 characteristic 🙂 ).

See here for tons of before & afters!

I have to admit that I’m not always on board with some of the “afters”. Some of that is because there’s often not necessarily anything “wrong” with the befores, but some of it is personal preference – I would style a lot of people differently than how the DYT team tends to style, but for the most part, wow. Something so simple can take years and pounds off of your appearance, and it’s so intriguing!

Be sure to follow along as I visit my mom and help to transform her wardrobe, too!

You can try it for yourself – find your type.