Living the life you want:

I don’t want to be the bearer of bad news, but then again, you’ve probably already begun to suspect that nothing’s ever going to work out the way you’ve been wishing it would.

There is no magic formula, and Publisher’s Clearing House won’t be knocking on your door. (Although they might call…)

The only way to that life you wish you had is putting one foot in front of the other on the right path – the one called “Being Intentional”.

But sometimes being intentional is just plain hard.

It’s especially hard if impossibly high ideals keep you from ever starting.

Many of us have somehow latched onto the notion that if we wait until just the right moment to start something, we’ll miraculously be awesome at it. But that’s a little ridiculous if you really think about it.

“Waiting for my ship to come in.”

“Waiting for the stars to align.”

“Waiting for my big break.”

Let’s say you start a new job with all the systems in place and working like a well-oiled machine, it still takes time for you to get in sync and know all the ropes.

No matter what you’re trying to do in life, there is always going to be a practice period.

If there’s anything we’ve learned in the last couple years it’s that waiting to start is the surest way to not achieve your goal.

The good news is that you can stop waiting for someday, and take steps to start really living now! 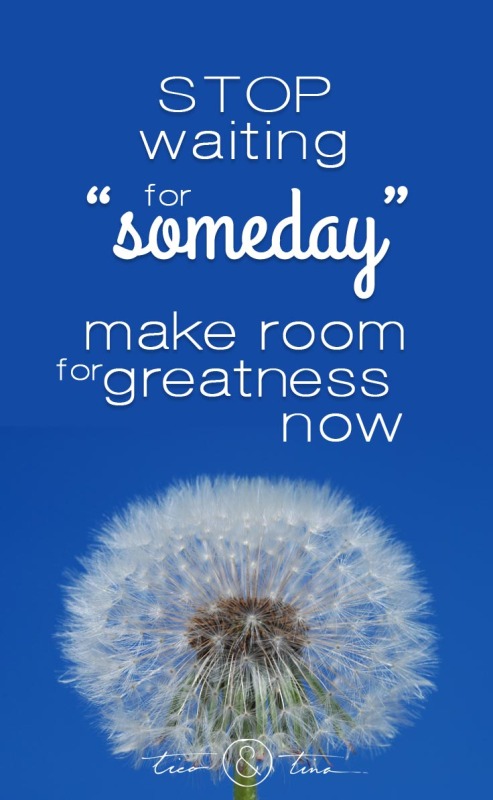 We’ve been working at this life thing together for 10+ years, and it’s been quite a bumpy ride, but through hard work and the grace of God we’re blessed to now be living a life we only could have dreamed. These are a few of the things we’ve learned along the way:

2. Identify the Important Things – it’s pretty hard to live the life you want if you haven’t even identified what that looks like. Let yourself dream a bit… but ultimately, what do you want to be true of you at the end of your life here on Earth?

Work backwards from that – what things in your life are not contributing to that goal?

What things do you need to prioritize better?

What small change can you make TODAY?

3. Simplify – no matter what you are aiming at in life, and no matter what life throws your way, it will all be so much easier if you simplify first. I really can’t over-state this: SO. MUCH. EASIER. Simplifying compounds all of your efforts, making them much more effective.

4. Just. Start. – stop waiting to start practicing what you were made to do, living the life you were made to live. You’re not going to be awesome at it overnight. That’s ok. Start now so that you’ll be awesome sooner 😉 Let’s get some of those mistakes out of the way. Let’s wear off a bit of that new job smell. Let’s start gaining experience that we can build on.

5. Put More Obstacles in Front of Your Bad Choices – there are always going to be days we don’t feel like making the best decisions, moments we’re tempted to throw in the towel. Those are the times you need to prepare for now – make it harder for yourself to sabotage your efforts.

We put a bit more of what we would tell ourselves if we could go back in time in this short ebook.