Everything is just a little more complicated with a family, and minimalism is no exception.

It can take a while to get everyone to come around to the idea of living with less, largely because usually the initial focus is on all the things they have to get rid of. Even if you try to focus on the benefits, it can be hard to really believe at first. This is why I recommend a gradual ease into minimalism with a family. As benefits begin to prove themselves, you will pick up speed.

One of the things that is hard to keep under control is kids’ toys. Lord knows I’ve tried. 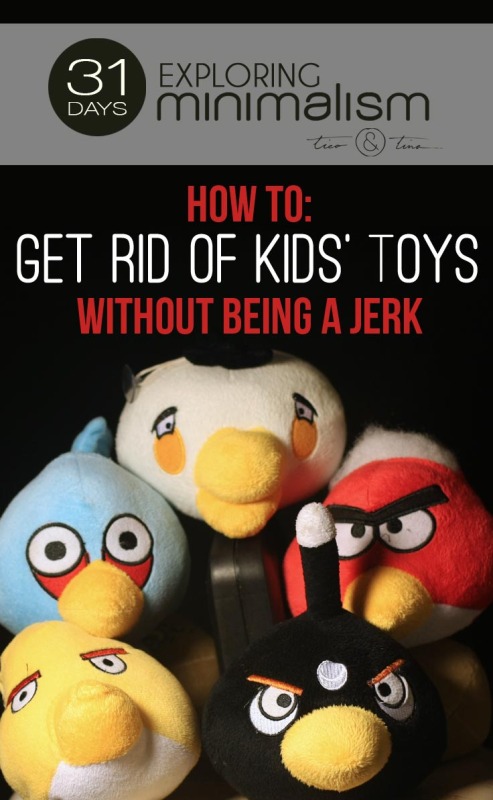 We’ve always lived in a relatively small space, so I used to request that people not buy the kids toys for their birthdays and I tried to make wish lists for the grandparents to buy from. But no matter what, eventually it still gets out of hand.

Too many toys stunt natural creativity and the clutter creates an atmosphere that encourages discontentment.

As we began to conquer the battle of too many toys, we uncovered very welcome benefits:

When we started to get serious about creating a minimalist lifestyle, I wanted to tackle the issue of toys in a way that I felt was fair to the kids.

This is what we did:

I think it’s important for kids to be a part of the process of weeding out.

Just because we know and understand that most of the stuff isn’t going to matter to them a year from now, let alone 20, doesn’t mean kids’ feelings now aren’t relevant. Not involving kids in the decisions also misses an opportunity for them to learn some valuable life lessons.

1. You can keep memories without holding onto things.

Sentimentality is important to me. I’m not trying to raise callous kids, and it’s certainly important to remember what and where we’ve come from. However, there are a lot of things that jog a special memory in your mind or general feeling of nostalgia that a picture of it will work just as well. Our family also does weekly vlogs of our lives where many things are captured as well as the actual moments.

2. There are different levels of importance.

I think it’s great for kids to learn at a young age how to evaluate what something means to them and that it is a continual process of re-evaluating as they grow and mature. Guiding their minds to constantly consider what is most important and hold things lightly, relationships carefully, will serve them well for the rest of their lives.

Selling toys at a garage sale, online, or consigning, are great ways for kids to get some monetary gratification on top of the other benefits of down-sizing, which also helps to provide incentive in the beginning especially. When we weeded through the kids’ stuffed animals a while ago, it was easiest for us to play the consignment role. We set up one day and gave them 5¢ for each one they chose to get rid of. As you can see if you watched to the end of the video, that price point wouldn’t cut it now that they’re a little older 🙂 And honestly, the extra space is worth far more.

Another excellent lesson for kids to learn is the value of blessing others. Find someone else who would love to enjoy the toys that are ready to move on from your family.

I promise I really did not tell the kids to answer the way they did in the video when I asked them if they thought it was better to have a bunch of toys they sort of liked or a few toys that they really enjoyed. They’re starting to really get it, and it’s been such a life-changing journey for our family.